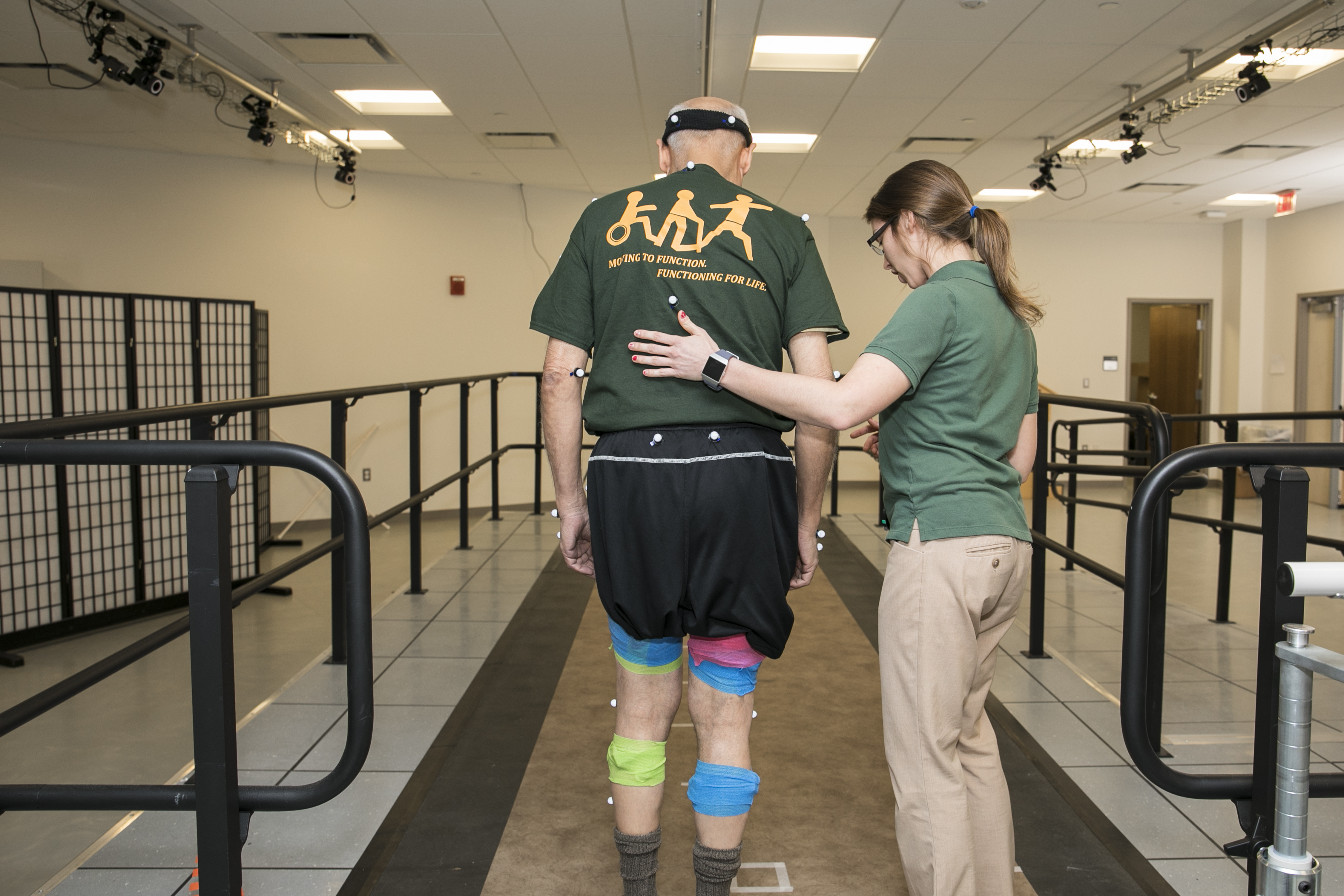 Last year, George Mason University’s Department of Rehabilitation Science wrapped up a clinical trial for people with spinal cord injuries and their walking function. Because of the intervention they received by participating in the study, people like Rolf Ness, who injured his spine and was told he would never walk again, defied the odds.  ​

Now, Mason faculty and students at the College of Health and Human Services are taking some of the lessons learned from that study and applying them to a rehabilitation study for those with Parkinson’s disease, a central nervous system disorder that affects movement. ​

"Typically, people with Parkinson's disease walk slowly and take short, shuffled steps,” said Clinton Wutzke, assistant professor in the Department of Rehabilitation Science and co-investigator of the study with principal investigator Andrew Guccione, chair of Rehabilitation Science. “We're trying to determine if this novel intervention is successful in decreasing the energy used in walking and increasing the force of each step."​

The clinical trial will involve a series of training sessions featuring specific exercises to improve the walking function of people with Parkinson’s disease. Much of the study protocol was proposed by Rehabilitation Science PhD students who were involved in the previous study. ​

"This work doesn't get done without graduate students,” said Wutzke. “The students are the ones that collectively redesigned the intervention used in the previous study of people with incomplete spinal cord injury to specifically identify sets of exercises that may be beneficial for people with Parkinson's disease. They really led the charge."​

Fourth-year PhD student Kerry Rosen worked on the incomplete spinal cord injury study in her first year and helped develop the intervention for the clinical trial of the Parkinson’s disease study. Much like the first study, each session is broken down to practicing movements in their simplest form, Rosen said, and each phase will build upon the last and increase intensity. ​

The Parkinson’s disease intervention will also focus on more factors that affect walking and will utilize cutting-edge technology in the Functional Performance Laboratory in Peterson Family Health Science Hall to record lower extremity muscle activity, a portable metabolic system to measure breathing, and various devices that measure the characteristics of stepping during overground walking. ​

“Human movement isn't just one system taking over,” said Andrew Pechstein, a second-year doctoral student in the department who also worked on the incomplete spinal cord study. “It's really a multifaceted problem that you have to address from multiple angles in rehabilitation.” ​

For 12 weeks, twice a week for an hour, 30study participants will perform a variety of tasks while also having their heart rate, breathing and even their number of steps monitored. Studies will be done at both a comfortable pace and a challenging, heightened intensity to help people respond to the high degree of variability in everyday, environmental challenges. ​

"We can test a lot of things in the lab, but ultimately life happens outside of the lab,” said Wutzke. ​

Wutzke said that the study is in response to community needs. There is a large group of people with Parkinson’s in the Northern Virginia area, he said, and nationally more people are being diagnosed with Parkinson’s than ever before. ​

"If we didn’t have the support of people with Parkinson’s disease in Northern Virginia, then we probably wouldn't be conducting this trial," said Wutzke "Ultimately, it's the tremendous support of the Parkinson’s community that helps the department kick this study off."